Image © Department of Education and Skills.

27 young rappers from third class at Scoil Íosagáin, Farranree brought the house down when they performed live earlier today at a National Forum on Education for Sustainable Development (ESD) at the Department of Education and Skills, Dublin. The boys were representing Music Generation Cork City (MGCC) at the event.

The group departed Scoil Íosagáin – an all-boys DEIS Band 1 school on Cork City’s north side – bright and early this morning accompanied by their teachers Der Fitzgibbon and Mr Crowley. They had worked hard in preparation for this national performance of their own original rap ‘Throw it in the Bin’, which they created and produced during weekly in-school workshops with MGCC musician Garry McCarthy (GMC Beats Workshops).

Delegates at the Forum in Dublin were bowled over by the infectious energy and skill of the young musicians - who were joined by Garry and their teachers on the day - and joined in with the group on the chorus of their track. Listen in to their brilliant lyrics on the rap on SoundCloud:

Mr. Crowley's class were inspired to write the lyrics of 'Throw it in the Bin' when ‘Irish Business against Litter’ named Farranree as The Litter Blackspot of Ireland. Ironically, when Cork City Council previously ran a Tidy Schools Competition, Scoil Íosagáin won five years in a row!

The creativity and enterprise of the Scoil Íosagáin boys in seeking to highlight the importance of sustainability in their locality has also led to them being invited to head up an Anti-Litter campaign by Cork City Council in the coming months. 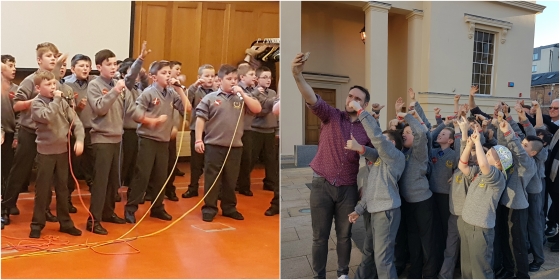 Speaking of their fantastic performance, Rosaleen Molloy, National Director of Music Generation said: “This group from Scoil Íosagáin are terrific Young Ambassadors not only for their school, but also for their City, County and for Music Generation nationally. They have shown remarkable initiative and skill in highlighting the importance of promoting clean neighbourhoods and protecting the environment through music and rap and it’s wonderful that they have had this chance to share their message at such a significant Forum today. They can be very proud of their musical achievements!”

MGCC Coordinator Mags O’Sullivan said: “Scoil Íosagáin has developed a proud tradition of creative music production with Garry McCarthy (GMC Beats) and Music Generation Cork City is delighted to be a part of their story. The boys of Scoil Íosagáin bring joy whenever they perform, supporting each other, giving pride to their community, school, and city, and spreading hope for the future of our planet.”

Previously groups from Scoil Íosagáin have performed at various Music Generation Cork City concerts in Cork Opera House. They have been invited to appear with performers as diverse as comedian Des Bishop and pop twins Jedward, and wrote the brilliant Santa Anthem which went viral on YouTube and rocked the 2014 Late Late Toy Show. Check out the video here:

Today’s Forum in Dublin was attended by dozens of key stakeholders involved in Education for Sustainable Development from Ireland and overseas, including representatives from Government Departments, Inspectors, education partners and organisations who work with sustainable development and development education. The event was held in the Clock Tower at the DES building, Marlborough St, Dublin 1.

The National Strategy on ESD has been developed by the DES, in consultation with key stakeholders. It provides a framework to support the contribution that the education sector is making and will continue to make towards a more sustainable future at a number of levels: individual, community, local, national and international.

For more information about this and other Music Generation Cork City initiatives and events contact:

MGCC is part of Music Generation, Ireland’s national music education programme, initiated by Music Network, co-funded by U2, The Ireland Funds and The Department of Education and Skills, with matched funding from Cork City Council, Cork ETB, The HSE, CIT, UCC and Cork City Partnership.