Monday, 10 July 2017, Dublin: Music Generation Carlow traditional Irish music ensemble ‘Reelig’ was hosted by President Michael D. Higgins and Sabina Higgins at a Community Day Party in Áras an Uachtaráin on Saturday 8 July. The Party, MC’d by RTÉ’s Anne Cassin, was the 8th and final event in the 2017 series of Garden Parties celebrating the work of people and organisations active on themes of citizenship and community. Directed by their tutors, musicians Áine Donohue and Ciarán Somers, ‘Reelig’ performed an electric set for the President, Sabina Higgins and more than 400 guests among a line-up of acclaimed musicians including Paddy Casey and Irish band Vinci. 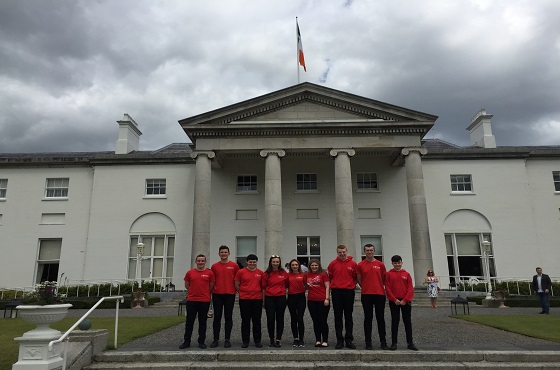 At this prestigious event at Áras an Uachtaráin ‘Reelig’ represented Music Generation as Young Ambassadors – sharing their work and ensemble performance with voluntary groups and active citizens from across the country, who are working to build a better, more inclusive Ireland. In addition to their performance, the young musicians enjoyed an opportunity to meet the President and Sabina Higgins and to capture this memorable moment on camera with an official photo.

Just before their performance, Conor McDermott (age 16, Rathvilly) who plays banjo with Reelig said: ‘We’d like to thank President and Sabina Higgins and Music Generation for giving us this opportunity. It’s a real honour and these chances to perform at such prestigious events give us great experience for the future. We’ve had a really fun day so far – the team at Áras an Uachtaráin have been so friendly and hospitable. We’re looking forward to playing for them and the guests!’