Following their performance as part of the spectacular Centenary Concert ‘A Nation’s Voice’, we’re delighted that members of Music Generation Choirs from across Ireland will feature on a brand new RTÉ CD recording of One Hundred Years a Nation, released in today’s edition of the RTÉ Guide!

One Hundred Years a Nation is a major piece of choral music which made its world premiere at the National Museum of Ireland, Collins Barracks, as part of the official State programme of events on Easter Sunday, hosted by Miriam O’Callaghan. It was commissioned especially by RTÉ from composer Shaun Davey with text by writer Paul Muldoon, and has been recorded for CD release with the RTÉ National Symphony Orchestra and conductor David Brophy. The CD, issued on the RTÉ lyric FM label, will stand as a legacy recording capturing the full force of the memorable open-air performance which featured the voices of 31 adult and youth choirs from 19 counties in Ireland.

You can listen to two excerpts from the recording online through our SoundCloud stream:

Despite driving wind and rain on the day of the premiere performance earlier this year it was clear that One Hundred Years a Nation struck a chord with all present as well as with viewers watching the performance live on RTÉ One.

It was an easy decision to make a studio quality recording for posterity – the challenge was how and where to record 800 singers, the 80 plus members of the RTÉ National Symphony Orchestra, conductor David Brophy and New York-based poet Paul Muldoon, whose stirring narration is a hallmark of the piece. The Helix, Dublin was the chosen venue and so, on October 1st, buses from the four corners of the country converged and the choirs, ranging in age from 8 to 85, reunited to record this powerful work. 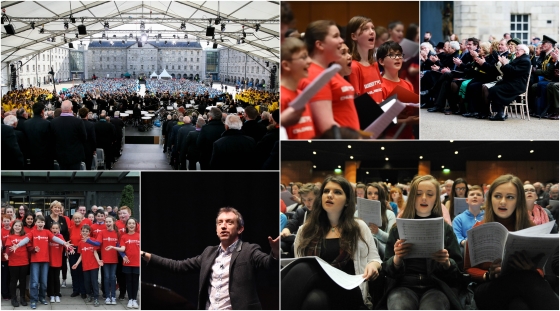 The recording was one of the most extensive ever undertaken by RTÉ. It involved more than 200 microphones and hundreds of meters of cabling leading to the mobile recording unit where composer Shaun Davey sat side-by-side with the engineers in his role as Producer. At the centre of it all conductor David Brophy cajoled and encouraged the best performance ever from the choirs.

And they were all more than ready for the big day – in the lead up to October 1st the choirs had regrouped for further rehearsals under the direction of their choral leaders, who also worked with them in preparation for the Easter Sunday concert performance. The Music Generation Choirs who took part in this epic Centenary project were:

For the children and young people involved this performance project was a truly unforgettable experience:

"Thank you for giving me the opportunity of a lifetime. It was an amazing experience. I am very grateful for getting the chance to have been in Dublin on Easter Sunday."
Emma, Music Generation Choir member

"I loved every minute of the rehearsals and the performance. I will never forget it and in a few years I will look back and think that it really was so important and exciting to be involved in something so big like 'A Nation's Voice'."
Orla, Music Generation Choir member

On Wednesday 21 December at 11.20pm, RTÉ One Television will broadcast One Hundred Years a Nation, featuring the choirs’ performance as part of ‘A Nation’s Voice’ on Easter Sunday at the National Museum, Collins Barracks. You can also look back on the event on RTÉ Player.

‘A Nation’s Voice’ was presented by the Arts Council and RTÉ, in association with the National Museum of Ireland, the Association of Irish Choirs and Music Generation, as part of Ireland 2016.

ABOUT THE CD RELEASE –

One Hundred Years A Nation
A souvenir recording of the music commissioned to be performed as the centre-piece of A Nation’s Voice on Easter Sunday 27 March 2016 at The National Museum Collins Barracks, Dublin.

Music by Shaun Davey | Text by Paul Muldoon | RTÉ Commission
Recording made with the support of the RTÉ National Symphony Orchestra, the Arts Council/An Chomhairle Ealaíon, RTÉ Lyric FM and the RTÉ Guide