Longford and Westmeath Education and Training Board (LWETB), together with Music Generation, is delighted to announce the appointment of musician and music educator Mary-Jane Sweeney to the role of Music Generation Development Officer for Longford.

In her new post Mary-Jane will begin a focussed phase of planning which will build towards the creation of an affordable, accessible programme of performance music education for children and young people ages 0 to 18 across the county.

Under the leadership of LWETB and in partnership with Longford County Council, Longford is one of 25 areas now participating in Music Generation, Ireland’s national music education programme. Initiated by Music Network in 2010, Music Generation is co-funded by U2, The Ireland Funds, the Department of Education and Skills and Local Music Education Partnerships.

Commenting on her appointment Mary-Jane said: ‘I’m delighted to take up the role of Music Generation Development Officer in Longford and to have the opportunity to build on the strong culture and musical tradition in the county. As a passionate musician and music educator I have experienced first-hand the transformative effect that access to music can have on children, young people and communities. I look forward to working closely with colleagues and partners to enable access to music tuition for children and young people in County Longford.’ 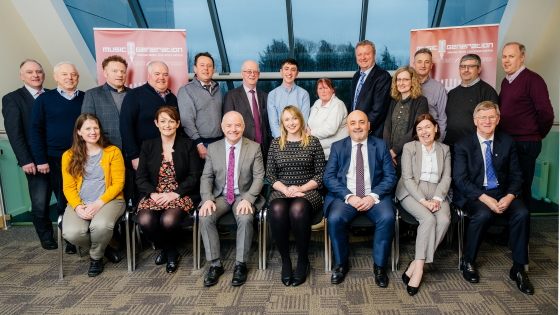 Members of the Board and management of LWETB including Chairperson, Cllr Frankie Keena mark the appointment of Mary-Jane Sweeney to the role of Music Generation Development Officer, Longford.

Beginning her music education at the age of six, Mary-Jane brings a breadth of experience to her role as Music Generation Development Officer. Her career as a professional cellist has allowed her the opportunity to play in orchestras around the world and over the past decade she has also become a highly sought after cello teacher. A graduate of Trinity College Dublin in partnership with The Royal Irish Academy of Dublin and The Conservatory of Music and Drama DIT, Mary-Jane holds a Bachelor of Music Education.

Welcoming the announcement, Chief Executive of LWETB Christy Duffy said: ‘We’re delighted to welcome Mary-Jane to the role of Music Generation Development Officer for Longford. The programme will be a great addition to the rich culture and tradition of music that we have in the county and will open up the door to performance music education for our children and young people. Mary-Jane’s appointment now marks an exciting step in the implementation of the programme and LWETB very much looks forward to working with Mary-Jane into the future.’

Paddy Mahon, Chief Executive of Longford County Council said: ‘I would like to welcome and wish Mary-Jane well in her new post. The Music Generation programme is an exciting development for Longford and we look forward to seeing the positive impact the programme will have on music education and access to music tuition across the county.’

Longford was among five new areas of Ireland selected for participation in the Music Generation programme in May 2019, along with Kerry, Kildare, Meath and Tipperary. The announcement of the five new counties was made as part of Creative Youth – a Creative Ireland Programme plan to enable the creative potential of every child and young person. Under the plan, the areas will be co-funded through the Department of Education and Skills to establish the programme within their county. This funding will be matched on a 50/50 basis by money raised locally, ensuring long-term sustainability into the future.

Further information about Music Generation Longford is expected to be announced over the coming months.