Find Your Local Music Generation
13 extraordinary young musicians from Carlow represented Music Generation, their county and their country brilliantly in Sitges last Saturday 28 October when they joined a headline performance as part of the Creative Connexions Festival of Irish and Catalan Culture.

Working together with musician James Mahon (Kíla), and under the ongoing direction of musicians and tutors Ciarán Somers and Áine Donohoe, Reelig performed one of Kíla’s pieces 'Skinheads', which was rounded out on the night by the jaw-dropping rhythmic footwork of champion Irish dancer David Geaney (Velocity).

You can look back at the performance in this video captured live at the event by James Mahon:

Despite being formed just three years ago, Reelig has fast become an accomplished collective of young trad players committed to performing exciting, diverse and challenging repertoire. Already this remarkable ensemble has been invited to perform at such prestigious occasions as the Carlow Pan Celtic Festival and The Worldwide Ireland Funds’ Conference, and at venues including Áras an Uachtaráin, Farmleigh House and Dublin Castle. 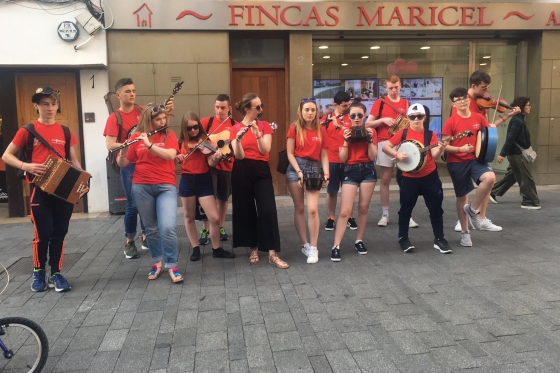 In addition to taking on this headline performance, Reelig took the opportunity to stage some impromptu sessions over the course of the weekend, all the while juggling rehearsals in the beautiful surrounds of Sitges town.

To keep up to date on the ensemble's next adventures you can now follow Reelig on Facebook!

For further information about this and other events and initiatives at Music Generation Carlow contact: